Cerebral Aneurysm: A Ticking Time Bomb That Can Be Defused

For some medical conditions, like a cerebral aneurysm, early diagnosis and treatment are the key to a cure.  Feldman Shepherd medical malpractice attorneys have handled numerous cases in which there was an unreasonable delay on the part of a healthcare provider in recognizing and treating cerebral aneurysms, resulting in unnecessary and severe injuries to the patient.

What Is a Cerebral Aneurysm?

A cerebral aneurysm, also known as an intracranial aneurysm, is an abnormal bulging or ballooning of an artery in the brain that can put pressure on surrounding nerves and brain tissue. A cerebral aneurysm can be identified using a variety of screening and imaging tests and can be treated using endovascular (coiling, flow diverting) or exovascular (clipping) techniques. Left untreated, an aneurysm can rupture (hemorrhage) with devastating consequences, including neurologic injuries and death.

There are two types of cerebral aneurysms, which are described by their shape. A saccular aneurysm is a spherical, berry-shaped bulge on one side of a blood vessel and is the most common, accounting for 80% to 90% of all intracranial aneurysms. A fusiform aneurysm is a bulge on all sides of the blood vessel without a stem. A third type, known as a mycotic aneurysm, occurs as the result of an infection that can sometimes affect the arteries in the brain, and is not discussed here.

Here are radiologic images of the two types of cerebral aneurysms: 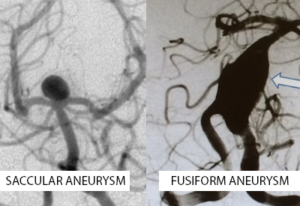 Will I Die from a Ruptured Cerebral Aneurysm?

It is estimated that as much as five percent of the U.S. population has an undetected aneurysm. The danger lies in the fact that aneurysms form as the result of a weakening or thinning of the wall of a blood vessel, making them prone to rupture (hemorrhage) which results in bleeding into or around the brain. Once an aneurysm ruptures, 10% to 15% of patients die before reaching medical care and up to 50% die within two weeks. Of those patients who do survive, 30% suffer a moderate or severe disability and most are unable to return to the same quality of life they enjoyed prior to the rupture.

What Are the Symptoms of a Cerebral Aneurysm?

Fortunately, utilizing current and proper diagnostic techniques, doctors can often diagnose and treat aneurysms before they rupture. When a cerebral aneurysm is large enough to press on surrounding nerves and brain tissue, the patient will often experience one or more neurological symptoms, including unilateral (one-sided) headache, blurred or double vision, ptosis (a drooping eyelid), pain above or behind one eye, a dilated pupil, numbness of one side of the face, or sensitivity to light. Patients with these symptoms will typically be referred to a specialist, such as a neuro-ophthalmologist, who will order tests to determine whether an aneurysm exists and, if so, whether it has already ruptured. Common tests include Computed Tomography (CT) scans, CT angiography, Magnetic Resonance Imaging (MRI) and Magnetic Resonance Angiography (MRA), as well as Cerebral Angiography and Cerebrospinal Fluid (CSF) analysis.

How Is an Unruptured Cerebral Aneurysm Treated?

If testing reveals an unruptured aneurysm, the patient will be referred to a neurosurgeon to evaluate the treatment options, which, according to the National Institutes of Health, include:

If Treated, Will I Survive a Cerebral Aneurysm?

Multiple studies of outcomes following treatment of routine aneurysms have shown mortality rates of less than 4% and morbidity of less than 10%, depending upon aneurysm size, location, patient age and other factors. The improved outcomes highlight the importance of early intervention to avoid rupture.