The National Transportation Safety Board (NTSB) has blamed a passenger harness/tether system for causing the 2018 sightseeing helicopter crash in New York and then trapping all five passengers in the chopper, underwater in the East River.

Five tourists died in the March 11, 2018, crash, which brought to light the dangers of “doors-off” sightseeing helicopter tours. These tours allow passengers to take unimpeded aerial photographs while dangling their feet outside the chopper.

The NTSB found that the crash was caused when the tail of the tether worn by the front-seat passenger got caught on and pulled the chopper’s floor-mounted fuel shutoff lever. This happened as the passenger was leaning back to take “shoe selfies,” i.e., shots of his shoes dangling thousands of feet over the city. According to news reports, the tour operator promoted this activity in its marketing materials and on social media.

Federal investigators determined that the helicopter was too low to allow engine power to be restored, and the pilot, who was not immediately aware that the fuel had been cut off, was forced to make an emergency landing. During the landing, one of the helicopter’s floats did not fully inflate, and the helicopter rolled right in the water and became fully inverted and submerged about 11 seconds after it touched down.

Investigators concluded that the crash was survivable, but a secondary restraint system — intended to prevent passengers from falling out during the doors-off flight — did not allow them to “quickly escape” as the cabin filled with water.

How Are Passengers Kept Inside Sightseeing Helicopters with No Doors?

The passengers, who all drowned, were wearing two harnesses, according to the NTSB. One harness was the FAA-approved safety harness. A secondary harness/tether was issued by NYONair, which owned the helicopter operated by Liberty Helicopters.

The NTSB found that the decisions by Liberty Helicopters (which operates as FlyNYON Doors-Off Flight, Airbus Helicopters AS350 B2, N350LH) and NYONair to use “locking carabiners and ineffective cutting tools as the primary means for passengers to rapidly release from the harness/tether system was inappropriate and unsafe.”

As part of its investigation, the NTSB reviewed a video from a ceiling-mounted camera inside the chopper that showed several passengers attempting to free themselves of the secondary restraint as water filled the helicopter’s cabin. A backseat passenger could be heard asking how to cut the straps on the safety harness, according to the report. Another passenger could be seen attempting to move toward an open door, but the cord to his headset was secured to the back of his harness and “became taut.”

Notably, the pilot, who wore only a conventional FAA-approved harness, was able to free himself and was the only survivor.

Are Helicopter Tours with No Doors Safe?

Following the probe, the NTSB — whose chairman called the doors-off helicopter involved in the crash a “death trap” — voted unanimously to recommend that the FAA suspend all doors-off passenger rides until stricter regulations are devised.

Investigators additionally found that Liberty and NYONair deliberately exploited a regulatory loophole to avoid registering the sightseeing flights as commercial air tours, which would be subject to additional FAA requirements and oversight that did not apply to aerial photography flights meant for professional photographers.

Are Sightseeing Helicopters with No Doors Still Flying?

The company made news in September 2019, while the crash was under investigation, for selling canine-and-companion rides for half off, which would allow a dog and its owner to fly for the cost of a single full-price ticket. FlyNYON discontinued the promotion amid public backlash.

“Please, ask yourself what purpose it serves to dangle a pet at 1,500 feet in the air, in open aircraft, simply so that someone could take selfies with their pet for the family photo album,” New York state director for the Humane Society of the United States Brian Shapiro said during a press conference held by Sen. Charles Schumer (D-New York).

“And if a dog gets loose and panics inside the small confines of a helicopter, things can go wrong for everyone very quickly,” Ashley Byrne, a campaign specialist for People for the Ethical Treatment of Animals, said at the conference. 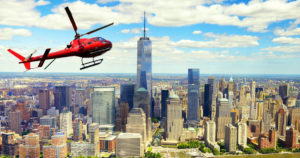 The New York tragedy followed on the heels of a Feb. 10, 2018, sightseeing helicopter crash into a remote area of the Grand Canyon that also took the lives of five people.

Three passengers died on the day of the Grand Canyon crash, and a couple on their honeymoon later died after being hospitalized. One passenger and the pilot of the EC-130 helicopter were left in critical condition. The fiery Grand Canyon crash — which one witness described as the worst thing he ever saw — was the third deadly crash since 1999 for tour operator Papillon Grand Canyon Helicopters, which says on its website that it transports an estimated 600,000 passengers yearly.

Across the United States, air tourism promises breathtaking views of everything from the New York City skyline, to the Hawaiian Islands, to the snowcapped mountains of Alaska, to the theme parks in Florida.

From 2000 through 2010, air tour operators in the United States flew an estimated average of 512,113 hours annually with an average crash rate of 2.7 crashes per 100,000 flight hours, according to the 2014 study, “The U.S. Commercial Air Tour Industry: A Review of Aviation Safety Concerns.” About one-fourth of these crashes resulted in at least one fatality, with an average of 3.5 people dying in each fatal crash.

Recent air tourism crashes that have grabbed headlines include:

May 2017: A tour company helicopter crashed on a glacier near Juneau, Alaska, while returning from a dog mushing camp. Seven people, including the pilot, were onboard and sustained injuries ranging from “slammed fingers” to lacerations requiring stitches.

June 2015: A sightseeing plane crashed into a mountain northeast of Ketchikan, Alaska, killing eight passengers and the pilot. Federal investigators found that the pilot became disoriented in cloudy weather under pressure to return the passengers to their cruise ship before it departed. Two other tour companies declined to fly that day due to low-hanging clouds.

November 2011: Four passengers — including a newlywed couple — died when a sightseeing helicopter slammed into a mountainside on the island of Molokai, in Hawaii.

October 2011: A 40-year-old British tourist died when a sightseeing helicopter plummeted upside down into New York’s East River, trapping her inside.

August 2009: Five Italian tourists died when their sightseeing helicopter collided in mid-air above New York’s Hudson River with a small plane and crashed into the water. In total, the crash took the lives of nine people, including a child who was a passenger aboard the plane. Just prior to the crash, an off-duty pilot employed by the tour operator noticed the plane and tried to alert his colleague by radio.

How to Pick a Safe Helicopter Tour

If you decide to go on a helicopter tour, a little research might go a long way in minimizing your risk, Vezina said.

He recommends that you look for tour operators with fleets that are less than five years old. “Newer is better,” he said. “You don’t want to be with a tour operator that is flying ‘dinosaurs’ around.”

With respect to doors-off sightseeing helicopters, Vezina said, “If your tour operator tells you that the tour is going to be operated with the side doors open, do yourself a favor and get out now.”

Also, the National Transportation Safety Board website provides an Aviation Accident Database in which consumers can type in the name of a tour company and get information about accidents and other incidents related to safety.

“Do your homework,” Vezina said. “You are putting your life in the hands of the tour operator. Don’t be afraid to ask questions.”