Yesterday, Thursday, August 3rd, 2017, at around 3:20pm a pedestrian was struck and killed by a FedEx truck. The incident occurred along Route 130 at Van Kannel Avenue in Hamilton Township, Mercer County, New Jersey. The victim, 37-year-old Keith Miles of Hamilton Township, was pronounced dead at the scene. 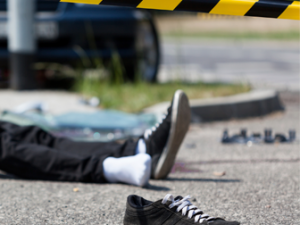 The Hamilton Township police said Miles was hit while in the southbound lanes near the intersection with Van Kannel Avenue. The truck was southbound and being driven by a FedEx employee, according to the police.

The incident is still being investigated. Video footage of the scene can be viewed here.

Unfortunately, these accidents where vehicles hit pedestrians occur much too often. Just this summer, two separate incidents occurred when two pedestrians were killed while attempting to cross Roosevelt Boulevard in Philadelphia, PA.

An 8th-grade student was injured when he was struck crossing Roosevelt Boulevard at a dangerous mid-block crosswalk which had no traffic control to regulate traffic. Attorneys Roberta Pichini and Jason Daria represented this young teenager. Read More

$900,000 Settlement for Teenager Struck and Killed While Crossing Roosevelt Boulevard

Attorneys Roberta D. Pichini and Jason A. Daria represented a second mid-block crosswalk case—this time resulting in death—obtaining a settlement of $900,000 for the mother of a 13-year-old girl killed on Roosevelt Boulevard. Read More