Postpartum Hemorrhage: Should I Worry About Losing Too Much Blood from Childbirth?

Every woman expects blood loss as part of childbirth, whether by C-section or vaginally. What they don’t expect is to hemorrhage to death, or near death.

Each year about 50,000 U.S. women are injured during childbirth, according to a recent USA Today investigation. About 700 new mothers die. Many of those injuries and deaths could have been prevented if hospitals had put in place safety practices to address postpartum hemorrhage, which is excessive bleeding following childbirth. If postpartum hemorrhage is not properly treated, it can cause the mother’s blood pressure to drop dangerously, which can lead to death, shock and other serious medical conditions.

According to USA Today, California is the only state to buck the alarming statistics, with its maternal death rate falling by half while maternal deaths continue to rise across the nation. There, safety experts and hospitals worked together to implement childbirth safety practices considered by medical societies as the “gold standard of care.” Those practices include “tool kits” to ensure that hospitals have the best protocols and necessary medical supplies and equipment in place to save women’s lives in the event of a hemorrhage, where quick action can mean the difference between life and death.

Below are answers to the eight most common questions asked by new and expectant moms about postpartum hemorrhage. 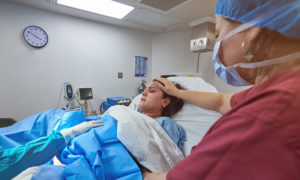 How Much Blood Loss Is Considered Normal for Childbirth?

The average blood loss for a single baby delivered vaginally is about 500 milliliters, which is about half a quart, according to Children’s Hospital of Philadelphia (CHOP). For cesarean births, the average is about 1000 milliliters or one quart.

What Is the Likelihood That I Will Suffer from Postpartum Hemorrhage?

The most common cause of postpartum hemorrhage is failure of the uterus to adequately contract after a mother gives birth. This condition is called uterine atony. After delivery, the mother’s uterus normally continues to contract and expels the placenta, which is a temporary organ that attaches to the uterine wall during pregnancy that supplies the baby with nutrients and oxygen. Those contractions help compress the blood vessels that attached the placenta to the uterus. If the contractions are not strong enough, the blood vessels will bleed freely, causing postpartum hemorrhage.

Postpartum hemorrhage also occurs when small pieces of the placenta remain attached to the uterine wall after the placenta is expelled.

According to CHOP, some women are at greater risk for postpartum hemorrhaging than others. Conditions that may increase the risk include:

Other factors that may cause postpartum hemorrhage according to CHOP are:

For How Long after Childbirth Am I at Risk for Postpartum Hemorrhage?

Postpartum hemorrhage usually occurs within one day of childbirth. But it can happen up to 12 weeks following birth, according to March of Dimes.

What Are the Symptoms of Postpartum Hemorrhage?

According to CHOP, the most common symptoms of postpartum hemorrhage are:

How Is Postpartum Hemorrhage Treated?

Women additionally may need to be placed on a ventilator or undergo a hysterectomy.

What Happens If I am Injured By Postpartum Hemorrhage?

The lawyers at Medical Malpractice Lawyers at  Feldman Shepherd Wohlgelernter Tanner Weinstock & Dodig LLP are pursuing medical malpractice claims for women injured by postpartum hemorrhage. The lawsuits filed on behalf of postpartum hemorrhage victims and families seek damages for medical bills, loss of earning potential, pain and suffering, and loss of the pleasures of life.