Thanks for the Memories, Patty Lopresti. We’ll Miss You! 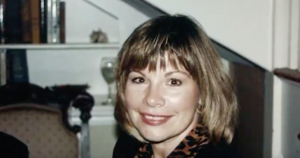 On Dec. 31, Feldman Shepherd will be saying goodbye to the ultimate smile, face and voice of our firm when long-time secretary Patty Lopresti, who has been with the firm since its inception, leaves after more than 30 years of service to begin her retirement.
While we have accumulated many poignant stories of Patty’s hard work, dedication, grace under pressure, and other contributions throughout the years — and would love to tell them all — today we focus on Patty’s human bonds. Her ability to connect with all people, from a place of kindness, has helped shape Feldman Shepherd into who we are today.

Before there was Feldman Shepherd, there was a bond between Carol Nelson Shepherd and Patty, who was her hard-working, faithful secretary at a different firm. So much so, that in 1987, Patty left her secure job to follow Carol, who was more than eight months pregnant, as she joined forces with Alan Feldman and Ezra Wohlgelernter with the goal of creating a law firm dedicated to excellence in representing the rights of victims, while providing a collaborative, congenial environment for attorneys and staff.

Carol was relieved that Patty agreed to come with her. She was a young trial attorney with her third child on the way, and needed Patty to keep her self-described “messy life and family” in order. To Patty, there were no distinctions between personal and business tasks. She was happy to do whatever was necessary to help Carol succeed.

Patty’s move was bold, Carol said. The three attorneys, all in their 30s, took out second mortgages on their homes to fund their startup and had only a small handful of cases. She described the endeavor as being “some combination of terrifying and optimistic.”

Patty chose optimism and quickly made herself indispensable to the firm’s success.

Two Secretaries and a Baby

In the early days of Feldman Shepherd, before the spacious, sun-drenched office with a spectacular view of Rittenhouse Square, there was a small, bare-bones office on South Broad Street in the Atlantic Building. The three attorneys shared two small offices. Patty, then-secretary Dee (now office manager) and Carol’s newborn baby crammed themselves into a secretarial area built for one.

Patty was strategically seated close to the front door so she could meet and greet clients, Ezra said. Building relationships and spreading good will and cheer was — and still is — Patty’s strong point. She’s a “living, breathing SMS smiley face,” he said.

Back then, office equipment was minimal. Patty and Dee typed on IBM Selectric typewriters. There was no fax machine. They befriended another firm in the building that allowed them to “borrow” their fax machine if a matter was urgent. 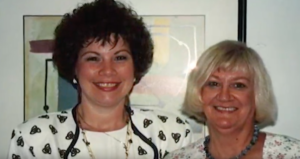 Bursting out of its space, the firm shortly moved to a larger office in the same building. Patty and Dee packed up library books, files and other office accoutrements and hauled everything (except furniture) to their new digs over a weekend.

“Patty and I thought we had died and gone to heaven because we had this huge space,” Dee said.

At some point, the typewriters were replaced with the latest computer technology — Leading Edge computers — that allowed Patty and Dee to type, edit and electronically save documents. There was no interconnectivity. The internet had yet to be born.

When asked whether Patty liked the new technology, Gilbert Marquez, Feldman Shepherd’s law firm administrator responded “I was expecting to find a computer-sized hole in Patty’s window.” Back then, Gil was the co-owner of an IT consulting firm that ushered Feldman Shepherd into the computer era.

In an age when YouTube tutorials and Clippy (the eager Microsoft paperclip) didn’t exist, Alan remembers Patty and Dee buckling down to learn the new technology with 20 MB hard drives equipped with a new program called WordPerfect. The file-naming conventions that they set up then are still used by Feldman Shepherd today.

As time marched on, the firm continued to grow. It moved again, this time to the 25th floor of our current building on Rittenhouse Square, four floors above our present location, sharing space with another law firm. We are happy to report that there were no tragic accidents involving Patty’s computer and the top-floor windows.

New people — both attorneys and staff — continued to come on board, attracted to the firm’s high-performance mentality, the opportunity to do meaningful work and the unique family-like culture. Now there were paralegals, a receptionist and a file clerk. One of those new people was Kathy, a secretary who Patty had befriended at a previous job. Patty reached out and got Kathy her interview.

Kathy, who has known Patty since 1982, described her as the “sweetest, nicest person I know.” Another employee dubbed Patty “Perfect Mary” for her perky personality and her magical way with people. The nickname endured throughout the years.

In 2013, still growing, the firm seized an opportunity to completely gut and reconstruct the entire 21st floor of the Rittenhouse Square building. That is the office we occupy today.

Our Heart and Soul 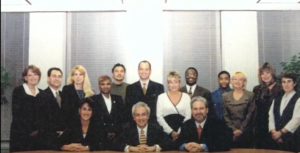 Personal injury law firms are places that ordinary people turn to under the most tragic circumstances imaginable, and Feldman Shepherd is no exception. Behind every legal victory there is a backstory of immense suffering.

Catastrophic birth injuries caused by medical negligence occur during what is supposed to be one of life’s most joyous occasions. Families kiss their loved ones goodbye in the morning never suspecting that a horrific accident involving a car, truck or airplane is about to strike, and it will be the final time they are together. Doctors sometimes fail to properly diagnosis their patients until it is too late to save them. Manufacturers put dangerous products that maim and kill into the marketplace, sometimes fully cognizant of the dangers. And the list continues …

In short, people going about their ordinary business often fall victim to devastating, life-altering injuries and losses in the blink of an eye.

Patty, with her kind, pleasant, and patient personality, was tailor-made to provide comfort to the afflicted.

So moved was she by the tragedies that she saw, that when Pennsylvania lawmakers contemplated damage caps (i.e., tort reform) in 2002, Patty headed to Harrisburg on a bus to protest. She knew the devastation that would be wrought upon those who had already endured so much if fair compensation for their injuries — the only form of justice available — was suddenly cut off.

To Patty, the cases were never about typing a complaint, scheduling a deposition, mastering dozens of medical abbreviations or pulling the medical literature. They were about the people. 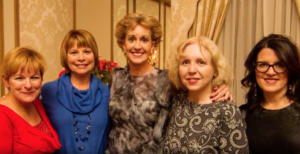 Her compassion extended to charitable work. For many years, she spearheaded the Feldman Shepherd staff tradition of making a donation to a worthy charity in the name of the firm during the holiday season. For Patty, giving back wasn’t something just the attorneys did.

Patty embodies all that is good at Feldman Shepherd. She is the heart and soul of the compassionate, collegial, high-performance firm that three young, ambitious trial attorneys sought to create when they took a leap of faith in 1987. As our firm has grown, Patty’s sweet smile, pleasant disposition and devotion to the firm’s clients has come to be appreciated by all of the firm’s 18 lawyers and the entire staff.

Patty, we couldn’t have done it without you. You’ll be missed.