On October 17, 2008, a Camden County jury returned a unanimous verdict for $31 million to Nicolas M. Anderson against the County of Camden, New Jersey for its failure to repair a highway and guardrail that it knew were dangerous.

Mr. Anderson was represented by attorneys John M. Dodig and Jason A. Daria. The jury verdict from the Superior Court of New Jersey Law Division, Camden County may represent the largest such verdict ever from that Court in any motor vehicle accident case.

On December 23, 2004, 18-year-old Nicholas M. Anderson was driving his car on Raritan Avenue near its intersection with Third Street in Waterford Township, Atco, NJ. A vehicle traveling the opposite direction entered Anderson’s lane of traffic. When he swerved to the right to avoid a head-on collision, he went onto the shoulder which was approximately six inches lower than the highway. Being unable to swerve back onto the highway because of the drop, his car went out of control and hit the guardrail. Upon impact, the guardrail penetrated the driver’s side door and severed Anderson’s right leg. He also sustained major injuries to his left arm rendering it nearly unusable. Raritan Avenue and the guardrail in question are owned, maintained and controlled by the Defendant, County of Camden.

The allegations against Camden County were that they knew Raritan Avenue, at the place of Anderson’s crash, was dangerous and unsafe and they failed to fix it. They also knew for 20 years that the guardrail was dangerous but by their own admission, they did not comply with safety standards because they do not repair dangerous conditions until there is an accident. 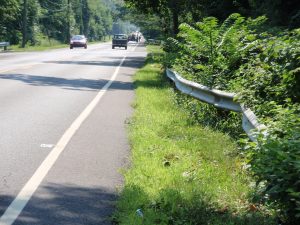