Sometimes in life something simple — something we do daily without much thought — can be an overwhelming hardship for someone else.
For six-year-old Xavier Ross and his parents, Jackie and Nathan, the hardship was finding a way for Xavier to explore the world outside his Bucks County, Pennsylvania, home. Xavier, who became quadriplegic following complications from heart surgery at age three, like most children, enjoys playing on his iPad and watching his favorite movie “Toy Story” and his favorite cartoon “Octonauts.” But he was missing out on the bigger world — going to amusement parks, movies, playdates, birthday parties, shopping trips to the mall, church, and other activities that many of us take for granted.

Unfortunately, Xavier’s situation is not uncommon.

With 89 percent of spinal cord injured individuals discharged from hospitals to a private home, transportation can be the key to improving a patient’s quality of life.

For Xavier, it was extremely difficult to leave his family’s home — other than by specialized medical transportation for doctors’ appointments — because he had outgrown commercial children’s car seats and could not hold his body in a sitting position in a regular seat. His parents were arguing with their insurance company about getting Xavier a special needs car seat. Even if they got one, there was still the issue of physically lifting Xavier — a growing boy — to place him in it.

Enter the Huffman Foundation. Established by Feldman Shepherd partner Daniel S. Weinstock in 2006, the foundation recently donated a $47,000 handicap-adapted 2017 Chrysler Pacifica Minivan to Xavier and his family. Now Xavier can travel without leaving his wheelchair.

The foundation was established as part of a legal settlement in a birth injury case of a child named Tony Huffman, whose dream was to go to Disney World. Unfortunately, Tony died before his dream could be fulfilled. But with some creative lawyering, Weinstock and Tony’s parents came up with a way to honor Tony and fulfill the dreams of other children, like Xavier, in the process.

As part of the legal settlement in Tony’s case, the defendant’s insurance company was required to make a yearly contribution to the Huffman Foundation. Weinstock then engaged the rest of the Feldman Shepherd team, and they all agreed to contribute a portion of all fees recovered from the firm’s cases involving cerebral palsy. Mary O’Donnell-Green, one of Feldman Shepherd’s paralegals, became the foundation’s co-administrator and together, Weinstock and O’Donnell-Green began reaching out to the Children’s Hospital of Philadelphia (CHOP), United Cerebral Palsy, St. Christopher’s Hospital for Children, and tri-county area social workers for other children who shared Tony’s dreams of a Disney vacation.

The foundation’s charitable projects include:

Now Xavier — and his four-year-old sister Elliott — explore the world together, holding hands as they travel in the minivan on their many new adventures. The family has already checked out The Bucks County Children’s Museum and plans to go to Sesame Place and local parks come spring.

Mom Jackie reports that as Xavier explores his new world, “His personality is starting to come out again. The way he sits in the van he has a direct view outside. You can see him taking the world in. It is very clear he is enjoying himself.”

Way to go, Xavier! We’re thrilled to hear you are enjoying your exciting new adventures! 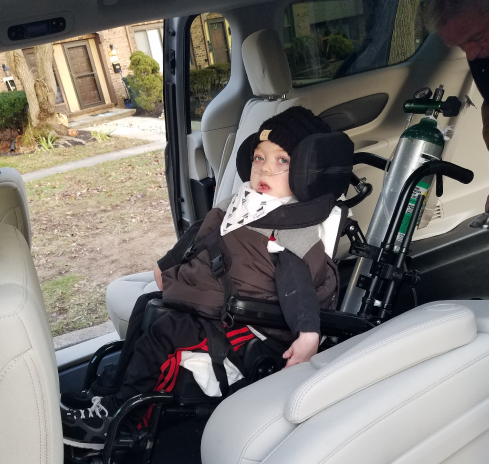